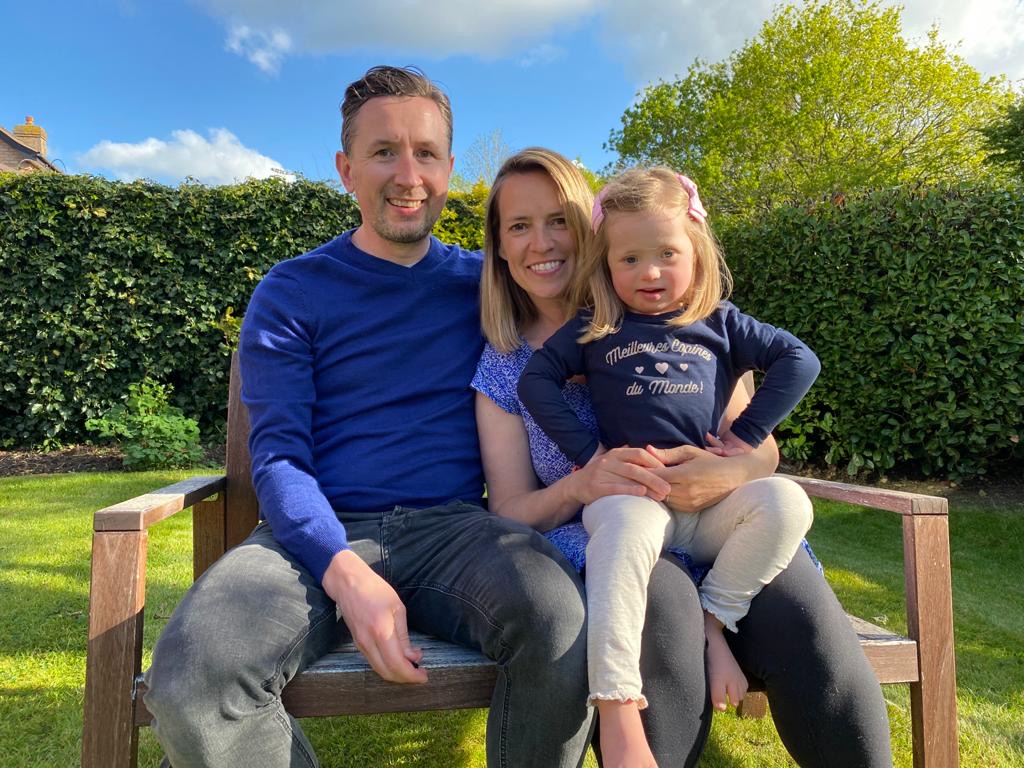 My husband Kevin launched Coraline Skincare online in February 2020 as a gift to our daughter Coraline.

Coraline was born in August 2017 and was diagnosed at birth with Down’s syndrome and two holes in the heart. For me this was a shock and she has, in many ways, been my greatest teacher in my awareness of life, and myself.

Kevin responded with pure love from the moment she was born, and I have learned a lot from him about adaptability and pivoting when situations are not as you expect. He is quick to adjust. I am less so, but I know that about myself, and I embrace who I am.

Coraline had sensitive skin from birth which reacted to many products. Kevin had been a chef for twenty years and had also been in sales using his remarkable energies. He had been making pure natural soap as a hobby with a friend who had taught him the process, and when he saw how it worked on Coraline’s skin he was propelled to begin his own business, believing he could help others too. He had dreamed of having his own business. He is passionate about natural, organic ingredients and nutrition.

As for me, I write a blog, Coraline and Us. I am writing a book about our lives with Coraline and how your perspective shapes your experience.

The points I am sharing here are as applicable for me writing my book and for our lives with Coraline, as they are for our business.

Through work with our wonderful goals coaches, we set out clearly what our professional goal was from the beginning. We wrote it in the present tense; the tense is important as then you begin to inhabit it and believe it. We read our goal out every morning.

Visualise your goal. Believe in yourself, and act as if it’s here already. Our goals coaches call it “entering the wish fulfilled”. Of course, there will be moments of self-doubt and that’s OK, but trust your intuition above all else. It is not about what anybody else thinks of your idea. It is about what you think.

Numbers 1 and 2 are up to you, but not number 3. We have learned that it is not about engineering what happens, by controlling every step, but about keeping the belief, putting the right energy out, and allowing the hands to appear. We have found this both in our business journey, and in our journey with Coraline who is now four years old.

People have appeared on our path with her to encourage and support us, and to move us forward with a quantum leap such as a friend recommending an Occupational Therapist trained in Neurology who we now see who is affecting huge changes in Coraline’s development.

We just need to be open. We began our online business in Surrey from our house. Then Kevin hired a converted stable to work from about an hour’s drive away. We then moved house in Surrey, and he worked from the garage there.

When we followed our personal dream to move and live by the sea in Devon, we were looking for houses to rent in late Spring 2021. So was everyone else! There were hundreds of people interested in every property. Out of nowhere, a friend found a house for us in Topsham, Devon, through local contacts, which was not yet on the market. When we went to look around it, our landlords said, “we do actually have a shop around the corner to rent too”. Our landlords had the choice between renting the shop to us or to other interested parties and they said to us, “we are going to choose you, because we believe in you”. The house and the shop came to us. We could not have predicted this happening. Our friends and customers say to us, “as it was that effortless, it was meant to be”. We are very grateful. We have both absolutely loved our first few month in the shop and all our conversations with customers.

Of course, there was fear in the build up to beginning, but Kevin put in place some Consultancy work on the side and simply began. A favourite saying we’ve heard Oprah quote before: “Jump and the net will appear”.

Five months later, in July 2020, he was lucky enough to be featured by Holly Tucker, small business champion, in one of her social media live tea parties. Holly was making dreams come true for eight small businesses. Each had submitted a wish for something they would love. Kevin asked for a foldaway desk as he had been working on a piece of wood laid out on Coraline’s bed during the day. She sent him one.

Fast forward to November 2021, and we have our own shop in Topsham, Devon, and we sell not only Kevin’s handmade organic skincare products, but the work of three of the other small business owners featured in the same “live” as him.

Holly said that by launching in February 2020 we will have learned so many lessons which might otherwise have taken a year to learn. We also love that she said when you start a small business happiness within is key.

When you are purpose led, great things come about! We found that being clear on our Purpose, Vision and Mission has guided everything we do. For us:

Our purpose: To be a source of pure love for people, planet and skin.

Our vision: To help everyone live happily in their own skin.

Our mission: To restore your confidence with the purest organic products which heal and nourish sensitive skin of all ages; products that are so good you have to share.

We also wrote out our values as these underpin everything we do too.

This is a fine quality! This comes back to belief, trust and not needing to know the how. Keep visualising, keep going, keep believing. Even if you are not seeing results, which was the case for us at the beginning, keep going! Kevin often says to me, “focus on what you do want; not on what you don’t want”.

When you launch a business there will be people who are by your side; be it your partner, your best friend, friends or family.

What was key, we found, was to sit down together and check in as to how we were feeling. We both got to a point where we had entered a stressed energy. We had employed a wonderful marketing company for help in early 2021, and it meant a complete re-launch of everything; new website, new copy for the website, new packaging, new products launched.

We were slightly unprepared for the huge amount of time it would require from us both. Before I knew it, I was much more involved, helping to proofread, as this is my amateur passion, and contributing to decisions. This snuck up on me and I found I was short on time for my own dream of writing my book. Looking after Coraline and keeping up with her therapies and researching support for her takes a lot of my time and energy, and any other time I had for “me” was spent on the business. So, it was about me actually articulating how this all felt and about being “seen” for me too.

We sat down and used a technique we have learned from our goals coaches. We each drew a mind map of our feelings around the business on a piece of paper. We then re-did the mind map writing all the feelings just as we wanted them to be. We burned our first piece of paper and put the second one up on the fridge and we re-read it regularly.

Whoever it is who is your biggest cheerleader, make time for them and supporting their interests. It is about not taking that person for granted.

It is a case of simply taking the time to value them and to encourage them in their pursuits, so that they feel as empowered and valued as you do.

One thing Kevin and I did was to set boundaries; no business speak before 8.30am or after 9pm. This has worked wonders for us as we realised the business had begun to permeate all our conversations. Whilst starting a business was Kevin’s dream, it wasn’t necessarily mine. I like to stay below the parapet as it were. But I can be as hands-on or as hands-off as I choose to be, and I have found actually it works well to test my comfort zone! It’s quite funny as I often say to Kevin, “your business” and he corrects me, “our business”. Through him embracing my ideas, I am now really interested and engaged.

It’s important to stay in the energy of why you are doing what you’re doing. A friend helped us set our shop up for opening day on 1st November 2021. I remember him saying, “guys, take a moment and look around and smile”.

I’ve saved the one I love the most for last! This is one that Coraline is teaching us every day. Don’t compare yourself to anyone else; only to yourself yesterday.

For me, I think I had slipped into trying to make Kevin’s personality a little like mine and also to trying to shift mine to be like his. I thought because he worked so hard, I needed to too. In fact, the secret is to simply inhabit the truest form of yourself.

Kevin loves to get up at 6am. He does his meditation, his Wim Hof breathing and so on and then he works nineteen to the dozen. He thinks nothing of working all day long, until 10pm. It comes from his years working as a chef where he thrived on discipline and hard work. It’s also due to his extroverted, effervescent personality. He loves to be busy and he works fast. He has huge levels of energy.

I learned a lot from watching “14 Peaks, Nothing is Impossible” where Nims Purja’s wife, Suchi, celebrates him being himself. He is an extraordinary man who would get up at 2am to train. She understood and allowed him to be himself.

For me, I am a quieter personality, and I require more down time. I work slowly and am more detailed. I have come full circle back to myself, to respect my ways of working and his.

Coraline is not yet walking or talking and she is entirely where she is meant to be as her own person. All we need to look at is her as an individual, not compared to anyone else.

The biggest thing Coraline has taught us is that the beauty comes when you embrace being yourself. And when you run your business with that authenticity, it shines and shines.