OmniPork, the Great Taste Award-winning world’s first 100% plant based pork and the company that puts the planet, people and great tasting food first, is proud to announce their arrival in Sainsbury’s from mid October with not one, but two of their best-loved plant-based porks, one of that is the;

Pork strips are commonly used in Asian cuisines. OmniPork Strips, launched by OmniFoods, is high in protein (19g of protein per 100g). It is low in saturated fats, free from cholesterol and provides a source of fibre and potassium. Compared with raw pork shoulder, OmniPork Strips has far lower calories and total fat content. The formula is cruelty-free, non-GMO and without added hormones, antibiotics. OmniPork Strips is suitable for almost every dish. Along with OmniPork Mince and OmniPork Luncheon, the whole range allows chefs to curate an infinite variety of dishes.

The new arrivals, OmniPork Strips, is renowned around the world for their incredible versatility thanks to their unique ‘raw’ style format. This means that they’re perfect for cooking from scratch and can be transformed into any of your favourite meat-free meals: with mouthwatering tender and juicy texture! Whether you steam it, pan fry it, deep fry it, roast it, or use it like a stuffing, OmniPork makes a delicious meat alternative for any cuisine. Spicy chilli tacos? An Italian spag bol? Homemade banh mi? The options are endless.

Made using a natural blend of pea protein, non-GMO soy, shiitake mushrooms and rice, OmniPork is 100% vegan, lower in salt than meat, uses no hormones, no antibiotics and is non-GMO. First developed in Hong Kong, with the ambition of creating a healthier alternative to meat for all, OmniPork has gone on to take the world by storm… and the UK is next! 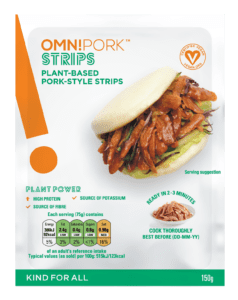 Back to Product Reviews